(New to PredictIt? Use this referral link to get up to $20 of your initial deposit matched and support this blog).

As we begin the sixth week of 2019, where do things stand in the race for the Democratic nominee to be President?  Last we checked, in mid-December, Beto rode high atop the field, but a lot has happened since then!

When considering market pricing of a wide-open event happening in the distant future, it’s probably wise not to get too hung up on the exact numbers it spits out.  (That is, who cares right now whether Kamala really has a 25% chance or a 20% chance).  Betting markets are distillations of conventional wisdom in numerical form – and that means the changes in price can actually tell us something about how that conventional wisdom is shifting as well.

In this post, I discuss the fluctuations of this market and what might happen next.  In general, the story it tells is that Kamala has pulled just a bit away from the rest, with the Three White Dudes in the chase pack and the rest of the field bunched up together within plausible striking distance while Gillibrand has started to fall off the pace a bit.  So let’s review what’s happened to each of the top nine candidates since the beginning of 2019:

I wrote initially of Kamala:

When I think of Kamala, I’m struck by how little organic interest there seems to be in her.  Maybe I don’t follow the right people on twitter – but where is the buzz?  Her tweets kind of suck too?  She’s got a sharp, aggressive wit but seems to keep it restrained.  Her public speaking is okay.  But really she needs a Moment or two.  People need to be inspired by her (the person) such that they talk about her, want to work for her, want to vote for her.

And this I think is the take that’s aged the least well.  Her strong rally numbers (it helps to announce in a major city of course) and relatively large one-day fundraising totals post-announcement vaulted her into front place in the market, a position she hasn’t relinquished since.

To be sure, her value also been aided by perceptions in mid- to late-January that maybe Beto and Biden wouldn’t run after all, and her price more recently has declined as the the white dudes gain back their value ahead of what look like more and more likely runs. 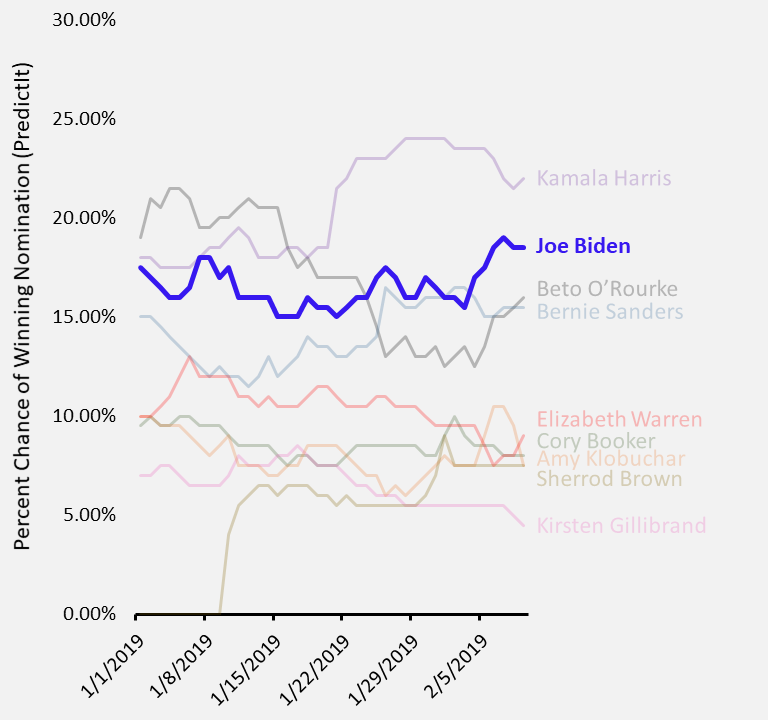 Is he gonna do it or what?  If he does announce to run, and soon, I expect his price will clear 22c at least on the initial announcement.  He is, after all, the leader in the polls.  But if he doesn’t?  Well then it will be very very interesting to see which candidates get his value and which don’t.  For now, his price has been steadily increasing in anticipation of an announcement.

Gone are the heady days of 24c Beto, but so too are gone the sad and bleak days of 11c Beto.  If you look closely at his graph, you can see his price begin its descent a few days after his cloyingly Medium-documented road trip began (Kamala’s strength in her announcement hurt him as well), and things especially fell off when he said he was considering going into teaching instead of running.  And then you can also see the big spike up after his Oprah interview where it seemed more and more likely that he does jump in after all.  What I wrote last time still holds, although I’d maybe give a bit more credence to the idea that his family might keep him back:

Beto is clickable, likable, electable, _____able.  He knows it (he loves it).  The media want him to run (my god, the clicks).  He wants to stand in front of the crowds again (but maybe he doesn’t say this out loud).  His wife is probably against it (but what do I know).  He will probably run (the betting markets will go insane if he doesn’t).

Ah, Bernie.  He’s supposed to be running by now, and yet no official announcement.  I’m very curious to see what his price does if and when he does.  While I’m pretty bearish on his overall chances, he does (or did) have quite the legion of loyal followers, the proportion of whom is over-represented among market participants (most traders are young, male, white).  Could he spike to 20c?  Note that he’s already well off his lows of 11c when we had no reporting at all that he might run, so some of the spike might be already built in at this point.

What I wrote about Warren seems pretty true still:

Her path – Put out lots of policy proposals thinking they’ll matter and drop out on March 11.  No, uh, let’s see.  Win NH and knock out Bernie, hoping he endorses her (their politics are close enough).  Carry MA and hold her own in CA/TX on Super Tuesday.  Hope the field is bunched enough that she can grind it out for a plurality at the convention.

She’s obliged by putting out several policy proposals, and, to her credit, drawing reasonably impressive crowds all over Iowa.  She acquits herself well in the town hall format and I still maintain that she’s the smartest candidate in the field.  In the market, she really benefited by being first – her price ballooned when folks saw the response she got in Iowa.  But the air started going out as more and more people jumped in and it became clear she was benefiting, in significant part, from just overall heightened interest on the part of the Democratic electorate (note as well she had a coincident dip in value as Klobuchar’s stock rose on initial reports the Minnesota senator was running).

If she can keep up this level of engagement, I think she could catch the chase pack, but I doubt she threatens the leader of the market until she proves herself with some real votes.

He’s in, he’s hungry, he had a great announcement video.  And yet his price really hasn’t done much aside from the announcement spike.  Of course, still a long way to go.

I actually didn’t really expect her to run, but here we are!  She’s going to work her Iowa-centric path hard, but she faces the same sort of price barrier that the rest of the people in the thick of the pack face.  Her announcement spike was quite large though, suggesting that the market is receptive to the possibility of elevating her to the next tier at some point.

If he runs (a reasonable possibility) I expect an announcement bump and not much else.  He might eat some of Klobuchar’s value but really he’s in the same position as everyone else in this group (the initial rise in his value from 0c comes from when PredictIt added him to the market).

She just really hasn’t caught on, and has taken on all kinds of water as more and more people have entered the field.  Her best shot (beyond a viral moment or two) is to hope the entire field flattens out and she can catch enough delegates to hang in there through to Super Tuesday.

Are the Three White Dudes gonna run or what?

If one of them decides not to run, who gets their value?

If they all run, do they take value from the rest of the field or from each other, leaving things roughly as is?

If and when PredictIt finally adds Julian Castro to the market, where does he end up?  If Tulsi is added, would she even see 3c?

Good luck out there, traders!