Wow – what a night.  Does it get any better than a super-tight down-to-the-wire election?  How about two?  Can we throw in a few flips elsewhere too?  Well then, folks, welcome to the August 7 primaries.  Oh and by the way  –

We’re not done yet

(Results links here, if you need them: https://predictingpolitics.com/2018/08/04/august-7-special-election-and-primaries-preview/ )

Action continues!  As I write this at 7:30am on Wednesay morning (after being up til 2am…), several markets are still unresolved:

OH-12: This is still almost certainly Balderson’s.  There are something like 8k potentially unrecorded votes (when you consider outstanding absentees and provisionals), of which I reckon at least 4-5k get counted.  In theory, these could drag the margin down under 0.5%, forcing an automatic recount (which Balderson still probably wins).  Provisionals are not counted for 11 days (we will get absentees earlier) so this one will be live for a while.

OH-12 MoV: Similary, this can technically still pop into 1-2%, if the outstanding votes favor Balderson or if a recount happens and the recount favors him a bit more.

MI R-Sen MoV: With 4% of precincts remaining in James-favoring Wayne and Macomb, he could still bump himself back into the 10-15% bracket.

MI-13 D primary special election: There’s some kind of chicanery afoot here.  I did not follow this on election night but from a groggy surmise of the market comments, it seems there might be a reporting error somewhere?  Either that or Brenda Jones really did get more votes for this race than she got for the non-special race.

KS R-Gov primary: Last, but certainly not least, this race has come down to the final few updates, depending (as I write) on the last 200 or so precincts in the achingly-slow counting Johnson County.  This one reportedly will finish by around 9am eastern (so about one hour from when I post this).  And in those 200 precincts, Colyer needs to make up a 541-vote deficit.  Good luck!  UPDATE: JoCo has finished, and we’re at 191-vote lead for Kobach and almost-certainly headed to a recount, pending however many provisionals are out there.

The action that was

Let’s also not forget just how insane election night was.  OH-12 saw at least four flips!  As we got down to the wire I think we went from 70 to 30 at least twice in an hour.  This chart shows some of the action but doesn’t really do it justice.  Really just a classic election market.  Difficult to play and time well, but if you lost money at any point the market was sure to give you a chance to make it up later (or misplay and lose even more…). 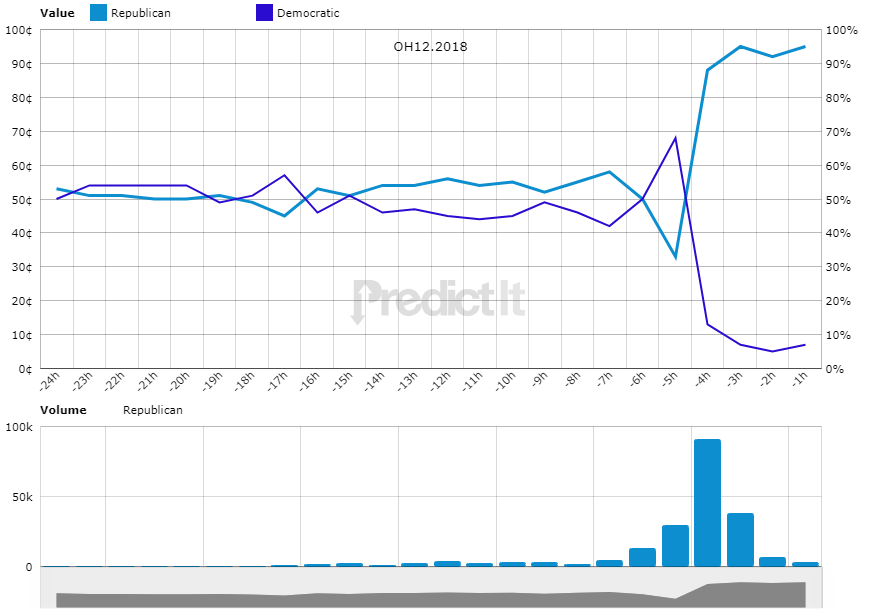 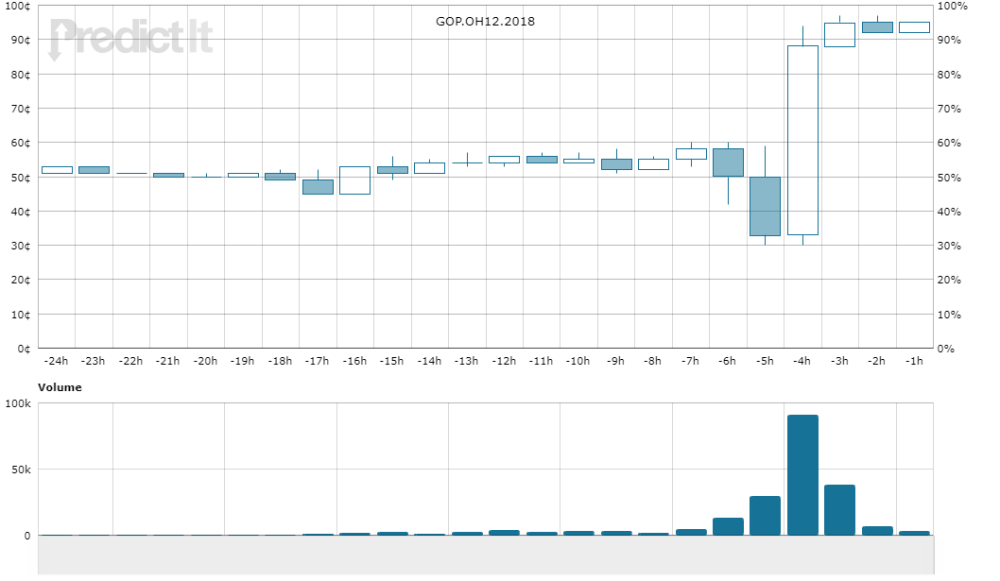 KS-Gov didn’t (and hasn’t) lacked for action either.

The rest of the week

Disclaimer: I probably have positions or intend to take positions in just about all the markets I discuss herein.  You should always do your own research prior to making any investment decision. You should consider my advice and knowledge I share to be fundamentally biased in its presentation and selection by my own financial incentives.  While I do not knowingly lie I certainly do knowingly omit information that I think gives me an edge.