For 2018, I’ve maintained The Spreadsheet, which I intended primarily to be a repository for links to markets to help folks on PredictIt find good places to spend their money.  But secondarily, I’ve found it very interesting where markets price an election compared to where modelers and experts do it.  Which will be the most accurate after the dust settles?  Of course, it will take a few weeks before we know the answer to that.  In the meantime, there are some interesting differences among the models and between the models and the markets.

The Big Markets are “Red-Shifted”

If a market’s price favors Republicans more than a model’s odds do, I consider that market “red-shifted”.  Long-time PI players are no doubt familiar with markets giving Republicans consistently 10c more value than they’re worth (Le Pen, Moore, even Trump in 2016 pre-election night).  This remains true in 2018: Democrats are at around 65% to win the House on PredictIt… and they’re easily at least 75% to win in an aggregate of all models.

Since I have the data, I can look at how PredictIt’s prices differ from what the models say at the level of individual elections.  For House races, that means averaging what The Crosstab, 538, and 0ptimus project (sadly I can’t use Harry Enten’s project or the others that predict margin rather than odds) and then comparing that average to the price the PI market gives.  Here’s what that looks like:

You can see there are a few races that are more than 15c “mispriced.”  Many of these mispricings are more likely produced by outliers among the models than market stupidity.  For instance, The Crosstab is in love with Kara Eastman in NE-02 for whatever reason, meaning there’s an enormous 65c range between the most bullish and most bearish model there.  On the other hand, some are worth keeping an eye on.  IL-13, for instance, is priced at 16c (or was, anyway) despite being worth a little less than twice that according to the modelers.

There are also races where pricing currently favors the Dems: 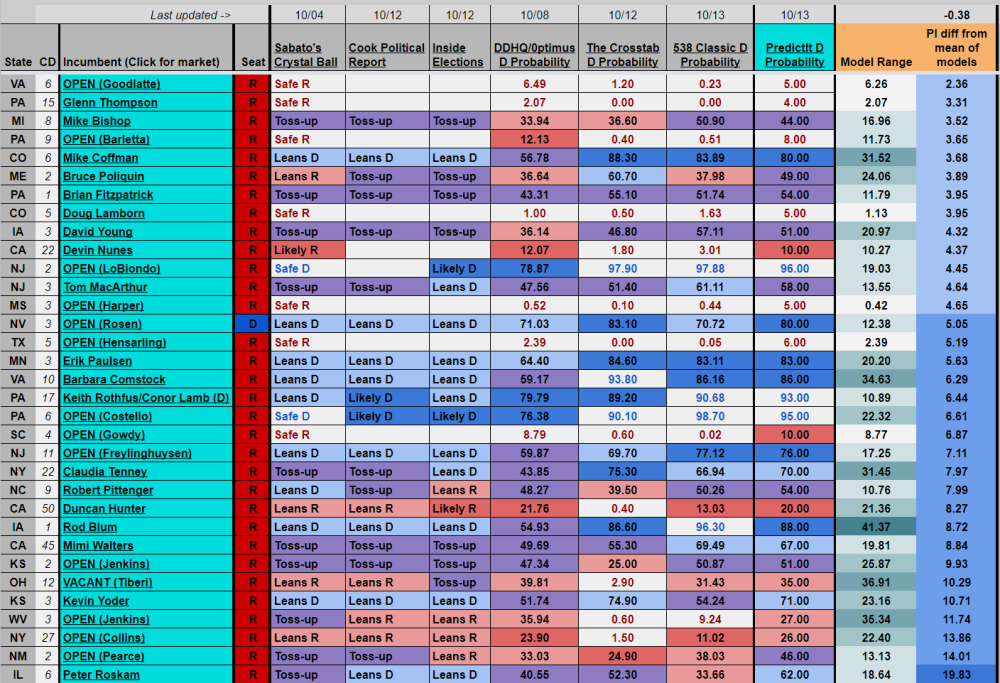 Here again inter-model disagreement drives a lot of the market-model disparities (oh how nice it would be to have more than three numerical models so that I could throw out highest and lowest numbers).  For instance, why is 538’s model so bullish on Peter Roskam?

But the most interesting thing to me is that if you then average all the price differences between models and markets for these individual House races you get…. -0.38 (the number you see at the top of that column in the images).  In other words, on aggregate PredictIt market participants are pricing individual House races just like the models!

In the Senate, Markets Are Very Red-Shifted

This is NOT the case in the Senate.

On average, PredictIt punters have the Senate races nearly 9c more favorable for Republicans than the average of models does.  And it’s even worse if you just look at the competitive races: AZ, FL, IN, and MT are effectively 20c “mispriced” and Claire McCaskill’s MO race is nearing that point.  And many of these we can’t really attribute to inter-model disagreement!

We’ve got a 10c disparity favoring Republicans in the big House markets.  Zero disparity in the individual races on net.  And a substantial disparity in the competitive Senate races.  How does that make sense?  Is this really crowd wisdom?

Of course, it could be that the models are more or less correct.  That there’s like 80c of expected value in Senate markets alone sitting out there, ripe for the taking.  Another 60c across all the House markets… or maybe we’ll find out on November 7 that the betting markets were right all along!

Disclaimer: I probably have positions or intend to take positions in just about all the markets I discuss herein.  You should always do your own research prior to making any investment decision. You should consider my advice and knowledge I share to be fundamentally biased in its presentation and selection by my own financial incentives.  While I do not knowingly lie I certainly do knowingly omit information that I think gives me an edge.